Welcome to our first Total War: THREE KINGDOMS dev diary! In this series, we’ll be diving deeper into how we do things around here. Each dev diary will focus on one specific area of what we do and how we bring both history and fantasy to life so you can conquer them. And who knows – maybe you’ll get a sneak peek at what we have coming along the way…

This time, we’ll be looking at how our art team takes characters from the pages of a novel from the 14th century and realises them as fully-fledged characters with their own personalities. Each one is painstakingly drawn in Photoshop and takes an average of around eight days to complete (fun fact: for all the characters in Total War: THREE KINGDOMS – including Eight Princes – this works out as roughly 73 weeks of work altogether!). We’ll also be revealing the final art for one of the upcoming Eight Princes, Sima Yue.

PHASE ONE: SHAPES AND SUGGESTIONS

The first step in this lengthy process is for our art team to sit down with our designers and discuss the character as much as they can. This ranges from talking about their general appearance and accessories all the way down to their personality and general demeanor so they can get a feel for how the characters poses and carries themself. The artist then goes and gathers as many refences and inspirational materials as they can get their hands on to help get their creative juices flowing.

After they’re suitably inspired, the artist will then create an initial block-up of the character, which helps nail down their general feel. The artist will suggest rough colour palettes, show whether the character is a fighter or more scholarly, and provide an important first look at them. These block-ups are then shown to the rest of the art team, the designer, and the 3D modelling lead. The design is tweaked and adjusted according to feedback until everyone is happy with it, and then the concept artist can really get their hands dirty.

Now the real fun begins. Our concept artist gets to work creating a much more detailed concept, fleshing out as much detail as they can so we can get a more complete feel for the character and their unique traits. This is done using detailed line art that starts to finalise the character’s facial structure, silhouette, and their poses to really drive home their personality.

Some basic material rendering is also done during this stage to make sure the materials used are clear cut and easy to identify. This is super important for the next step, which involves tonnes of communication in order to bring these characters to your screens. 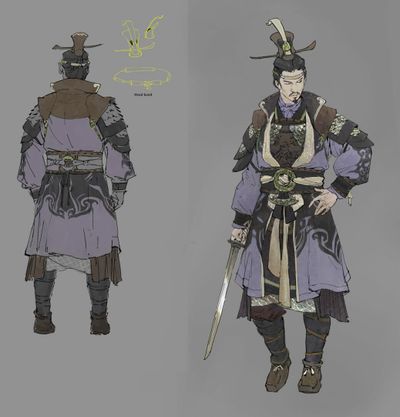 After yet more feedback and approvals from other artists, 3D leads, and the art director, work can begin on both the final portrait renders – and the final in-game model.

This starts out relatively simply, with the concept artist creating a detailed breakdown of each material, pattern, and accessory that should be added to the model, even going as far as to explain how each accessory attaches to them and how their clothes sit. This breakdown is given to the 3D character artist, and they then get to work doing the 3D version – but we’ll save the full details of that for another blog.

While the model is being created, the final portrait renders are hand drawn, usually by the same artist who drew up the concept, but sometimes they aren’t available so somebody else takes up the reins. Both the concept artist and the 3D character artist are in constant contact so they can keep the two pieces as consistent as possible (they sit almost right next to each other for exactly this reason!). Three separate poses are hand drawn for each character to represent their different states in game: happy, angry, and normal. 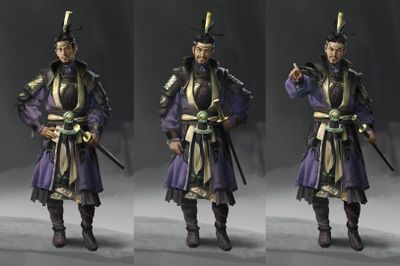 And that’s how we create our character portraits – let us know which is your favourite!

Next time, we’ll be giving some love to all you WARHAMMER fans – stay tuned!

Eight Princes releases on the 8th of August 2019 – pre-order here!